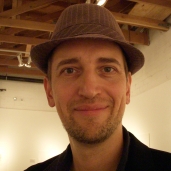 Born on the coast of the Baltic Sea, Stefan Kiesbye studied drama and worked in radio before starting a degree in American studies, English and comparative literature at Berlin’s Free University. A scholarship brought him to Buffalo, NY, and he received an MFA in creative writing from the University of Michigan. His stories, poems and essays have appeared in numerous magazines and anthologies. His first book, Next Door Lived a Girl, won the Low Fidelity Press Novella Award, and the German edition was a KrimiWelt Top Ten pick for four consecutive months. The book has also been translated into Dutch and Spanish and Japanese. Kiesbye’s second novel, Your House Is on Fire, Your Children All Gone, was published by Penguin in 2012. It was a Top Ten pick of Oprah Magazine, made Entertainment Weekly’s Must List, and Slate editor Dan Kois named it one of the best books of the year. It was translated into German, Spanish and is forthcoming from East Press, Japan. In Spring 2014, Messer, Gabel, Schere, Licht (Knife, Fork, Scissors, Flames) was published by Tropen Verlag/Klett-Cotta, Germany. Die Welt wrote that “Stefan Kiesbye…is the inventor of the modern German Gothic novel.” His LA Noir “Fluchtpunkt Los Angeles” (Vanishing Point) will be released by ars vivendi verlag in January 2015. Kiesbye teaches creative writing at Eastern New Mexico University.