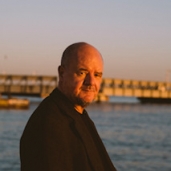 Rui Cardoso Martins (Portalegre, Portugal, 1967) is a writer, scriptwriter and playwriter, and the co-creator and co-writer of A Herdade/The Domain (Golden Lion candidate in Venice 2019 Film Festival, Toronto TIFF). Heis a two-time winner of the Grande Prémio APE, the first literary prize in Portugal. His novels include E Se Gostasse Muito de Morrer/Glad to Die, Let The Invisible Man Pass By, and The Bone of the Butterfly. His play Última Hora/Breaking News is in production, since its première of 2020, by Teatro Nacional D. Maria II, Lisbon. His short fiction Animal Stomach was published in The Common. He is also co-writer of TV series South (Arquipélago Filmes) and co-creator of Causa Própria/Natural Law. As a journalist, he went to Sarajevo during the war in 1993 and to the first free elections in South Africa, 1994. He writes both comedy and drama and has been translated into several languages.   Photo credit: Vitorino Coragem