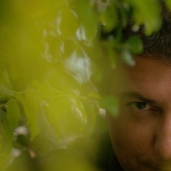 Rodrigo Garcia Lopes (Londrina, Parana state) is a Brazilian poet, fiction writer, musician, composer, and translator. He has published five collections of poetry, includingVisibilia, (1996), Polivox (2001), Nômada (2004),  and Reality Studio (2013). His poems, essays and interviews have been widely published and anthologized, including in Os Cem Melhores Poemas Brasileiros do Século 20 [The Best 100 Brazilian Poems of the Twentieth Century]. His second CD, Canções do Estúdio Realidade [Songs from Reality Studio), a new book of poems and the detective story O Trovador [The Troubadour] are forthcoming in 2013. He translates from the English (Whitman, Laura Riding, Plath) and from the French (Rimbaud, Apollinaire). From 1990 to 1992, Garcia Lopes lived in the U.S, where he obtained a M.A. in Interdisciplinary Humanities (dissertation on American writer William Burroughs) at Arizona State University. During that time, he gathered 19 interviews with American poets, writers, artists and critics, including John Ashbery, William Burroughs, Marjorie Perloff, Allen Ginsberg, Nam June Paik, Charles Bernstein and John Cage for his book Vozes & Visões (Voices & Visions, published in 1996). In 1994 he released his first collection of poems, Solarium (poems 1984-1994), as well as a new translation of Arthur Rimbaud’s Illuminations A freelance journalist and translator, he co-edits the arts magazine Coyote; he also performs his poems and songs regularly around Brazil. In 2012 he was selected to represent Brazil in the International Writing Program at University of Iowa (USA). In 2012 he was selected for residency at The Hermitage Artist Retreat.