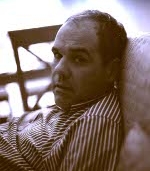 Meakin Armstrong is fiction editor of Guernica, a top-ranked literary and political site that’s received acclaim by magazines such as Esquire. He is a writer for Business Insider and a former employee of The New Yorker. His work has appeared in various fiction anthologies, and in Wigleaf, Noö Journal, InDigest, TheAtlantic.com, Time Out New York, and the books New York Calling: From Blackout to Bloomberg and Museyon Guides Film + Travel North America. In 2007, he received a Bread Loaf Writers’ Conference scholarship for fiction.