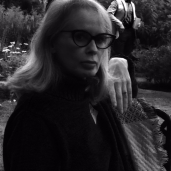 Mary Gaitskill is the author of the novels Two Girls, Fat and Thin and Veronica, as well as the story collections Bad Behavior, Because They Wanted To, and Don’t Cry. Her story “Secretary” was the basis for the feature film of the same name. Her stories and essays have appeared in The New Yorker, Harper’s, Granta, Best American Short Stories and The O. Henry Prize Stories. In 2002 she was awarded a Guggenheim Fellowship for fiction; in 2010 she received a New York Public Library Cullman Center research grant. Her novel Veronica was nominated for the National Book Award in 2005. She has taught at the University of Houston, New York University, The New School, Brown, Syracuse and Claremont McKenna College. She has been Writer-In-Residence at Hobart and William Smith Colleges and is at present the Sidney Harmon Chair at Baruch College. Her new novel The Mare is forthcoming in Fall 2015.