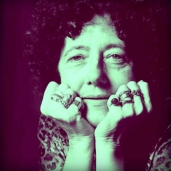 Maria Teresa Horta was born in Lisbon, Portugal in 1937. In addition to journalism, plays, and fiction, she is most renowned as a poet. She has published 21 works of poetry, from Espelho Inicial (First Mirror) in1960) to Anunciações in 2016, none of which have been translated into English. Soon after the publication of her first book she began her association with the group Poesia 61, through which she became acquainted with two fellow poets, Maria Isabel Barreno and Maria Velho da Costa. In 1971, during the fascist Estado Novo regime the three women (known thereafter as “The Three Marias”) wrote a controversial collaborative work entitled Novas Cartas Portuguesas (New Portuguese Letters). The book was banned, and a long and ugly obscenity trial ensued, dragging on for years, making worldwide headlines and turning the writers into feminist icons. In 1974 the regime fell and the charges were dropped. Two of the women subsequently used their notoriety to launch a fledging women’s movement in Portugal, which brought them even greater renown. In May 2014, the Sociedade Portuguesa de Autores awarded Maria Teresa Horta the Prémio de Consagração de Carreira, one of the country’s most important literary awards, and in 2017 she won the “The Best Poetry Book” Award.