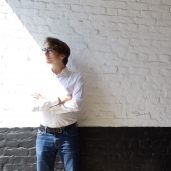 Luke Neima is the online editor of Granta Magazine, the United Kingdom’s best-known quarterly journal of literature and long-form non-fiction, originally founded in 1889 by students at Cambridge University. He is also the Deputy Editor of Review 31, an online review of the latest nonfiction, literary fiction and poetry. Before coming to Granta, he worked with the start-up publisher Unbound, and at Bloomsbury Academic. His reviewing, short-form fiction and translation has appeared in The Times Literary Supplement, Prospect Magazine and The White Review. Most recently, he has written two documentary films, A City Is an Island, about the Anglophone music community in the city of Montréal, and Brexitannia, a film about the recent referendum on the European Union in the United Kingdom, which stars Noam Chomsky, Saskia Sassen, Guy Standing, Nick Srnicek, Heidi Mirza, Federico Campagna and 49 Leavers and Remainers from across the UK.