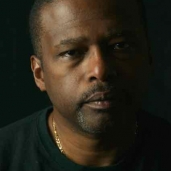 Jeffery Renard Allen is Professor of Creative Writing at the University of Virginia. Allen is the author of five books, most recently the novel Song of the Shank (Graywolf Press, 2014), which is loosely based on the life of Blind Tom, a nineteenth century African American piano virtuoso and composer who was the first African American to perform at The White House. The novel was featured as the front-page review of both The New York Times Book Review and The San Francisco Chronicle. It won the CLMP Firecracker Award, was a finalist for the PEN/Faulkner Award, and was also nominated for the Dublin Literary Prize. Allen is the author of two other works of fiction, the novel Rails Under My Back, which won The Chicago Tribune’s Heartland Prize for Fiction, and the short story collection Holding Pattern, which won The Ernest J. Gaines Award for Literary Excellence. Allen has received other accolades for his work, including a Whiting Writers’ Award, a Guggenheim Fellowship, the Chicago Public Library’s Twenty First Century Award, a residency at the New York Public Library’s Cullman Center for Scholars and Writers, and a residency at Bellagio. His website is www.jefferyrenardallen.com.