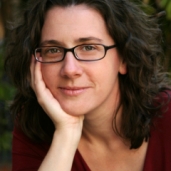 Jacqueline Goldfinger is a Philadelphia based playwright and dramaturg who teaches playwriting at the University of Pennsylvania. She’s a co-Founder of The Foundry, an organization that supports the development of emerging playwrights. Her new play, Skin & Bone, will world premiere at Azuka Theatre this spring. Her play, Slip/Shot, won the 2012 Barrymore Award for Outstanding New Play and the Brown Martin Award. Slip/Shot was also nominated for Weissberger Award, developed at PlayPenn and the Lark’s Playwrights’ Week, and featured in American Theatre Magazine. Her 11 full-length plays include the terrible girls which was nominated for a Barrymore Award for Outstanding New Play. Her work has been produced around the country. Seven of her plays have been published. For more information, please visit her online: www.jacquelinegoldfinger.com