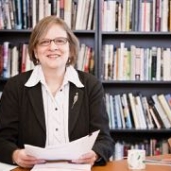 Fiona McCrae has been publisher of Graywolf Press since 1994, following four years at Faber and Faber USA in Boston, where she was a director and executive editor. From 1982 until her move to Boston in 1991, she was at Faber and Faber, Ltd., in London, where she worked with such authors as Kazuo Ishiguro, Caryl Phillips, and Howard Norman. McCrae has taught publishing courses at Harvard University and Emerson College.  Authors that McCrae has published at Graywolf include Elizabeth Alexander, Charles Baxter, Per Petterson, Salvatore Scibona, and Percival Everett. She currently serves on the board of Books for Africa and is an advisor for Open Letter Press.  She became an American citizen in 2003 and is married to the writer John Coy. Fiona travels frequently to New York City, where Graywolf keeps an office, to meet with agents, authors, and other publishing colleagues.