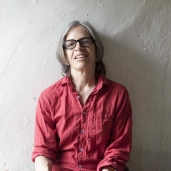 Eileen Myles first became known to many Americans through her openly female write-in campaign for President of the United States in 1991-92. Her poetic education took place at St. Mark’s Poetry Project from 1975-77 in workshops lead by Alice Notley, Ted Berrigan and others and by attending hundreds of readings for about ten years and then for the rest of her life. Always a virtuosic performer and reader of her own writing Eileen Myles has toured, read widely since the early 80s all over North America and Europe and off and on with Sister Spit, the queer & feminist post punk performance troupe since 1997. In 1995, with Liz Kotz, she edited The New Fuck You/adventures in lesbian reading. From 1984 through 1986 Eileen was Artistic Director of St. Mark’s Poetry Project. In 2004 she wrote the libretto for the opera, Hell, composed by Michael Webster performed in 2004 and in 2006. In 2010 for the Dia Center for the Arts she created and directed “The Collection of Silence” a large performance piece engaging dancers, poets, children, visual artists and Buddhists in a collective public act of silence at Hispanic Society in NYC.   Her latest book, Snowflake/different streets, is a dos a dos, meaning you turn it over and it’s another book. In LA Review of Books Brian Teare said of Snowflake/different streets “Myles’ genius lies in making the grand gesture that includes the trivial detail and the sublime at once, their juxtaposition underscoring how we are small and made large by connection, paradoxically isolate and dependent.” Other books include The Importance of Being Iceland/travel essays in art (2009), Sorry, Tree (poetry) 2007, Tow w/ artist Larry C. Collins (2005), Skies (2001), on my way (2001), Cool for You (novel, 2000), School of Fish (1997), Maxfield Parrish (1995), Not Me (1991), and Chelsea Girls  (stories, 1994).   Eileen is a Professor Emeritus of writing & literature at UC San Diego where she directed the program from 2002 to 2007.  She has since taught at U. of Montana in Missoula, Washington University in St. Loui, Columbia’s MFA program and NYU. In 2007 Eileen received an Andy Warhol/Creative Capital art writers’ grant for “Iceland.” Her Inferno received a Lambda Book Award for lesbian fiction in 2011. The Poetry Society of American awarded her the Shelley Prize in 2010. In 2012 she was a Guggenheim fellow in non-fiction for her forthcoming dog memoir Afterglow.   Let more awards and honors come. She lives in New York.