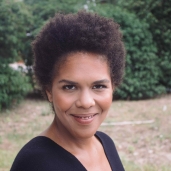 Djaimilia Pereira de Almeida was born in Luanda in 1982 and grew up near Lisbon. She has a PhD in Literary Theory from the University of Lisbon. In 2013, she was one of the recipients of serrote essay prize, in Brazil. Her writing has appeared in Granta, serrote, Zum, Common Knowledge, Quatro cinco um, Words Without Borders, Pessoa, and elsewhere. In 2016, she was one of the finalists of the Rolex Mentor and Protégé Arts Initiative. She is the author of a novel, Esse cabelo (Teorema, 2015/Leya Brasil, 2017) — winner of the Novos Prize Literature 2016 – and of Ajudar a cair (FFMS, 2017), an account of a summer in Centro Nuno Belmar da Costa, a community of patients with cerebral palsy near Lisbon. She writes a monthly column for Blog da Companhia.