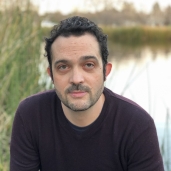 Chris Feliciano Arnold is the author of The Third Bank of the River: Power and Survival in the Twenty-First Century Amazon (Picador, 2018). He has written essays and journalism for The Atlantic, Harper’s, The New York Times, Folha de S. Paulo, Outside, Vice News and more. His fiction has been published in Playboy, The Kenyon Review, Ecotone and other magazines, and has been a notable mention in The Best American Short Stories. The recipient of a 2013 DISQUIET scholarship and a 2014 creative writing fellowship from the National Endowment for the Arts, he resides in northern California and teaches writing in the MFA programs at the University of San Francisco and Ashland University.