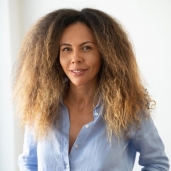 Yara Nakahanda Monteiro was born in Angola in 1979 and moved to Portugal when she was two years old. She writes poetry and fiction. Her first novel, Essa dama bate bué!/ Loose Ties (Guerra e Paz Editores, 2018), is an electrifying and colourful story, with shadows of an uncertain and shifting past. Is both a story of love and of war, a contemporary tale that deals with the past, a call for the independence of women as political beings and of their own bodies in search of freedom. Yara´s novel has been translated into several languages.  Memories, Apparitions, Arrhythmias (Penguin Random House, 2021) is Yara´s first poetry book and can be classified as decolonial and ecofeminist poetry. The poems are reflections on the condition of women and black people, everyday life, banishment and how violence against women is related to the destruction of nature.  Yara studied screenwriting and contemporary art. She has collaborated in the creation of scripts and screenplays for audiovisual arts and is a curator for podcast programming. Her stories and poetry have been published in magazines including Granta and Revista Pessoa. She is a regular guest speaker at universities on topics like feminism and Afro-European identities and narratives. Monteiro graduated in human resources and has worked in this field for 15 years, as well as in diversity & inclusion and in talent management. She has lived in several cities, such as Rio de Janeiro, Luanda, London, Copenhagen, and Athens. In her own words: she is a great-great-granddaughter of slavery, a great-granddaughter of racial intermarriage, a granddaughter of independence and a daughter of the diaspora.