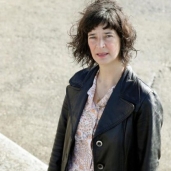 Patrícia Portela is a writer and performance maker born in 1974, living between Belgium and Portugal. She studied set and costume design in Lisbon and in Utrecht, film in Ebeltoft, Denmark, and Philosophy in Leuven, Belgium. Since 2003 she has worked on her own performances and installations in collaboration with international artists. She has achieved national and international recognition for her unusual work and is considered one of the most daring artists and innovative writers of her generation. She won the Revelation Prize in 1994 for her creative work in performance and cinema, the Prize Teatro na Década for T5 in 1999, the Gulbenkian Foundation Prize Madalena de Azeredo Perdigão for the performance Flatland I in 2004 and a special mention for Wasteband in 2003, and she was one of the 5 finalists of the Sonae Media Art Prize 2015 with her installation Parasomnia, amongst other prizes. She has been invited to participate in the prestigious International Writing Program (IWP) at the University of Iowa in 2013, and was the first literary resident in Berlin in 2016. She is the author of several novels (Banquet was a finalist of the Novel and Novella Big APE Prize 2012) and short stories. She is a founding member of the Prado cultural association since 2003 and an editor for Prado since 2008. Currently, Patrícia Portela writes chronicles for Jornal de Letras. Photo copyright Visao