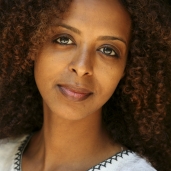 Maaza Mengiste is a Fulbright Scholar, photographer, and the award-winning author of Beneath the Lion’s Gaze, selected by the Guardian as one of the 10 best contemporary African books. The novel was named one of the best books of 2010 by Christian Science Monitor, Boston Globe, Publishers Weekly and other publications. Her fiction and nonfiction writing can be found in The New Yorker, The Guardian, the New York Times, BBC Radio 4, Granta, and Lettre Internationale, among other places. Maaza has won fellowships from Yaddo, the Virginia Center for the Creative Arts, the Prague Summer Program, and the Emily Harvey Foundation. She was the 2013 Puterbaugh Fellow and a Runner-up for the 2011 Dayton Literary Peace Prize, as well as a finalist for a Flaherty-Dunnan First Novel Prize, an NAACP Image Award, and an Indies Choice Book of the Year Award in Adult Debut. She was also a writer on the documentary film, Girl Rising.  Her second novel, The Shadow King, was published in 2019. She was awarded a Guggenheim Fellowship in 2022.