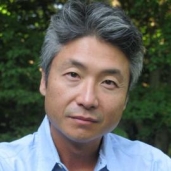 Chang-rae Lee is the author of six novels: Native Speaker (1995), A Gesture Life (1999), Aloft (2004), The Surrendered (2010), which was a Finalist for the Pulitzer Prize, On Such a Full Sea (2014) which was a Finalist for the NBCC and won the Heartland Fiction Prize, and his most recent novel, My Year Abroad (2021). His works have won numerous awards and citations, including the Hemingway Foundation/PEN Award, the American Book Award, the Anisfield-Wolf Literary Award, the Gustavus Myers Outstanding Book Award, and the Dayton Literary Peace Prize. In 2021, he was recognized for lifetime achievement in the Novel with an Award of Merit from the American Academy of Arts and Letters, as well as elected as a Member of the American Academy of Arts & Sciences.