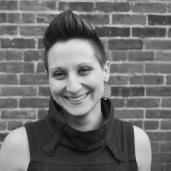 Annie Liontas’ debut novel, Let Me Explain You (Scribner), was featured in The New York Times Book Review as Editor’s Choice and was selected by the ABA as an Indies Introduce Debut and Indies Next title.  She is the co-editor of the anthology A Manner of Being: Writers on their Mentors.  Annie’s work has appeared in The New York Times Book Review, NPR, Gay Magazine, BOMB, Guernica, McSweeney’s, and Ninth Letter, and she is a contributor to Tolstoy Together: Reading War & Peace with Yiyun Li. She served as Visiting Writer at UCDavis, University of Massachusetts, and Bryn Mawr College before joining George Washington University.  Annie has served as a mentor for Pen City’s incarcerated writers, working with the Prison Writing Project at the Connally Maximum Security Penitentiary.  The Gloss, her interview series with women and non-binary writers, is running at BOMB, The Believer, Electric Literature, The Rumpus, and elsewhere.