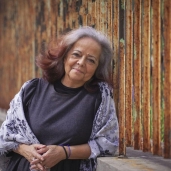 Ana Paula Ribeiro Tavares began her undergraduate degree in history at the University of Lubango Institute of Sciences and Education (ISCED), before moving to Lisbon where, in 1996, she completed a Masters in African Literature. Currently living in Portugal, she is a researcher at the University of Lisbon. From 1988 to 1990, Tavares was a member of the Board for the National Award for Literature in Angola, and was also head of the Research Office of the National Center for Documentation and Historical Research in Luanda from 1983 to 1985. She is also a member of several cultural organizations, including the Committee of the Angolan International Council of Museums (ICOM), the Committee of the Angolan International Council on Monuments and Sites (ICOMOS), and the Committee on Angola for UNESCO. As a poet and writer, she has published a number of works, including Ritos de Passagem (1985), O Sangue da Buganvília (1998), O Lago da Lua (The Lake on the Moon) (1999), Dizes-me coisas amargas como os frutos (Tell me bitter things like certain fruit) (2001, winner of the Prémio Mário António de Poesia 2004, awarded by the Calouste Gulbenkian Foundation), Ex-votos (Votive offerings) (2003) and A Cabeça de Salomé (The Head of Salome) (2004). Her latest book of poems is Manual para amantes desesperados. Her work has been published in anthologies in Portugal, Brazil, France, Germany, Spain and Sweden. Photo copyright: Ozias Filho